This is the final post in this FAQ series. 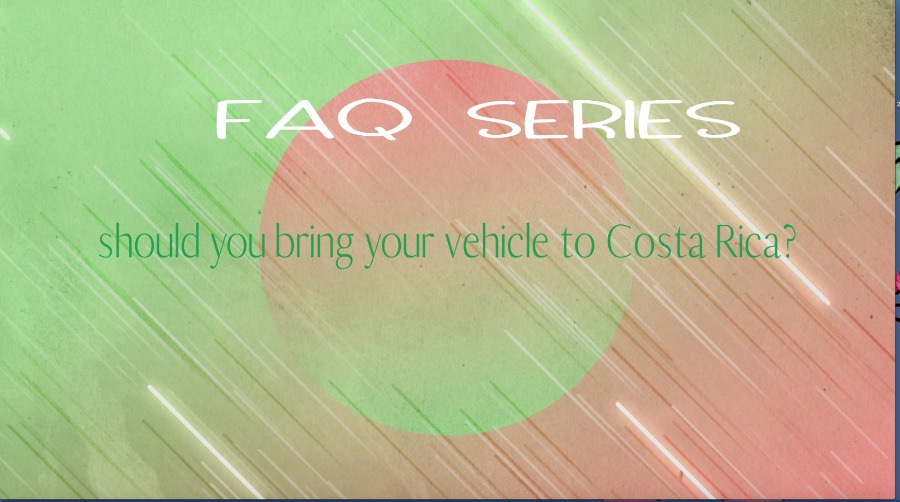 Should You Import Your Own Vehicle or Buy One in Costa Rica?

If you’re relocating to Costa Rica, and if you plan to own a vehicle, one of the decisions you’ll have to make is whether to import one or buy it here. You have three choices: you can import one (which you can put in a shipping container with your household goods, if there’s space); you can buy a new vehicle in Costa Rica; or you can buy a used vehicle from one of the many used car dealers.

If you import a vehicle from the U.S. or Canada, you will have to make arrangements for an import broker to shepherd it through the “nationalization” process. That includes shipping the car to Costa Rica, having it safety checked and the emissions tested, paying the import duty, and paying to have it registered and have license plates issued. Import brokers walk this bureaucratic maze all the time, so to them there are no mysteries. Container shipping companies that are based in Costa Rica arrange vehicle imports all the time. Their services are totally reliable.

Importing your own vehicle from North America means that you can shop for the make and model of your choice and you can bargain for the right price. You’ll have the opportunity to have the vehicle fully inspected and any problems can be resolved by a mechanic you know. Depending on the vintage of the vehicle, you can be assured of getting all the modern safety systems. And, using CarFax or a similar service, you can learn the history of the vehicle you are considering.

As you consider importing your own vehicle, it’s important to understand that Costa Rica’s vehicle import duty is assessed on its age and a sliding scale based upon Customs’ “black book” valuation. It doesn’t matter what you paid for the vehicle; Costa Rican Customs will assign it a value based on their black book.

NOTE: You cannot export from the U.S. a vehicle which has a financing lien registered against it. You also cannot export a leased vehicle.

Still missing my car but it would not have fared well in Costa Rica with the bad roads and potholes plus parts would have been SUPER expensive.

Every manufacturer is represented by a single importer of new vehicles in Costa Rica. That includes all the commonly seen U.S., European and Asian brands as well as some that are not imported to North America. When you shop for a new vehicle, you have only one source, that sole importer. New vehicles imported by the brand name importers are subject to the Customs duty and “nationalization” costs as are any other vehicle being imported. By the time you pay the freight and nationalization fees, the cost of importing a new vehicle or buying one in Costa Rica will be very close to to the same.

Many new vehicles sold in Costa Rica are the same brands and the same models as those sold in North America. They look the same inside and out, but the ones sold here weigh two hundred to three hundred pounds less. One wonders what’s missing.

In one case, an American couple bought a new Asian-brand sedan that appeared to be identical to the one sold in the United States, but the U.S. model has six airbags while theirs has only two. One wonders what else is missing . . .

The upside of buying a new vehicle in Costa Rica is that it will come with a warranty. Warranties issued by U.S. companies are not honored in Costa Rica.

The third option is to buy a used vehicle from a used vehicle importer in Costa Rica. Those vehicles are most commonly bought at U.S. auto wholesale auctions. The buyers know very little about their histories. Once in Costa Rica, they are cleaned up and, almost universally, their odometers are rolled back many thousands of miles. These importers sometimes buy cars that U.S. insurance companies have declared to be “totaled” wrecks or flooded cars that are beyond economical repair. Due to much lower labor costs, some of these vehicles can be made roadworthy again; others cannot be but are sold nonetheless. If you want a souvenir of Hurricanes Katrina, Sandy, Irma or others, we have them all.

You can also buy a used vehicle from a private party including, sometimes, a North American who imported it themselves. The risks are the same. You’ll have a very difficult time telling what you’re getting or whether the price is a good one.

It’s important to understand, too, that once all the nationalization costs are paid, they are added to the value of every vehicle, so that when it’s time to sell, you will pass those costs on to the next owner.

Our Recommendation: So long as time is not an issue, we come down on the side of buying a vehicle in North America of a make and model that is commonly seen in Costa Rica and importing it for your own use. The freight, insurance and “naturalization” costs will be the same as would be paid by a professional importer and you will have a much better chance of having a safe and reliable vehicle.

Hope you enjoyed the series and found it helpful. If you have further questions about anything you have read in this series, please check the sources listed in the post.

Big thank you to Dave Murray for providing this information!