The picturesque town of Grecia in Alajuela province has the distinction of being one of the cleanest towns in Central America. Located some 20 km north of Alajuela city, this small farming town is around a 20-minute car-drive or a 30-minute bus-ride away. Lying northwest of the capital San Jose, Grecia is situated in Costa Rica’s Central Valley amidst beautiful mountain landscapes and rich lush sceneries.

The local Tico community here is very friendly and eagerly welcomes visitors into their homes as well as their hearts. Mostly farmers by profession, the people here are relaxed and laidback. Being an important agricultural hub of the country, sugar cane is grown and harvested in Grecia in huge amounts, as is organic coffee and pineapples.

Grecia has a fantastic climate that is fresh and breezy, keeping the weather here cool most of the year. This area is a great place to explore with its green and unspoiled environment. Nevertheless, do be careful and remember to use a map, as one can easily get lost with the roads being quite narrow. They are not marked out well enough as well.

We love our little town of Grecia. It's close enough to the capital, San Jose and the airport but far enough away to have a very peaceful atmosphere. Living at 4,300 ft and about 15 minutes from the downtown hub we need to get around. For us, since we have no car, that means taking the bus.  However, being very used to taking Bart and other fast forms of transportation in the states, taking the bus in Grecia took a little getting used to.

Here are some bus facts:

1. You don't buy a ticket. You pay in cash to the driver

2. There are no fare boxes - When we got on the bus the first time, the driver was not on the bus but there were people already seated. We could not figure out what to do with our money so we took a seat. When the driver returned he came down the aisle with a box and collected the fare. When we get on normally he is sitting there with the box. You hand him the money and he gives you change - if you do not pay the exact amount - which for the longest time we could not figure out. We always gave him 500 mil (about $1 and he gave us some coins back) We now know the fare is 467 mil or about 87 cents.

3. There are several buses serving Grecia. Our bus serves San Juan and San Luis. The destinations are written clearly on the buses. Our bus company has about 3 or 4 buses they use to serve the San Luis ridge. I have seen only 3 different drivers. That is all. One of the buses by Daewoo, has very squeaky brakes. You can hear him coming. We seem to ride that one quite often (it is the one featured in today's video)

4. The bus drivers make deliveries on the route. Of course everyone knows everyone. People will wait at the bus stop and the driver will toss them a package or pick up one. Today a gentleman was at a stop and gave the driver a bag of chips through the window. 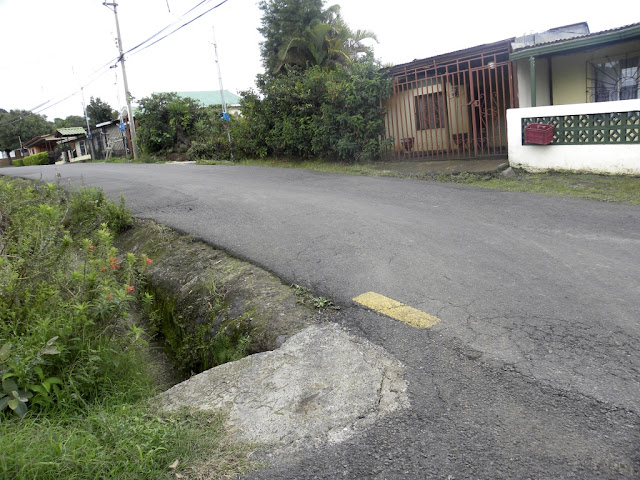 5. Bus stops are mostly marked with a yellow line in the street.

6. There is a bus schedule but not like the ones we are used to. They don't list each stop and the time of arrival or departure. They list only the time the bus will leave the Grecia terminal and the time it leaves the end point to return. Its up to you to figure out about how long the bus will take from each point and be at the stop.

7. There are mostly women, children and seniors on the bus (at least during the week). Many mothers ride with their young children taking them to school. The children are clean, quiet and wearing uniforms. The mothers who do not ride with the children will often be waiting at the bus stop to pick them up after school.

8. Everyone is very friendly and polite on the bus. No loud noise, no graffiti. The buses are CLEAN!! Seniors and women are respected

9. Music is supplied by the driver I guess as it i always playing.

10. The older children are into their phones and headphones just like back home.

Now sit back and enjoy the ride!

Itchy Feet Expat TV Day 21 - Take a Ride with us on the Bus to Grecia from Devon on Vimeo.