Today I'm going to cover several things at once and get you all caught up.

First - We now have a cat. A kitten. He came to us on July 5th. We had our housekeeper take him away to give to a family that wanted him but about a week later he was back.

I took him to the vet to have him checked out to make sure he was Ok and got him his first vaccination, de-worming, nails clipped and flea and tick prevention. Total cost $24.

Turns out he is a male about 4 months old. He is in good health.

We didn't really want a cat since I already have 2 dogs but there are a lot of strays here and rather than have him mistreated or dumped along the side of the road we have let him stay. He does not come in the house (unless he sneaks under the screen) LOL He loves playing in the hills and in the coffee fields. We have a large patio so he hangs out there most of the time (napping on one of our many chairs). At night he goes up on the ledge under the roofing over the patio (I guess he feels safer up high)

We named him Luis - actually one of our friends from California came up with the name. Beginning with the letter "L" to go with Lily & Lola and because we live in San Luis de Grecia. Lavanson is an L and my middle name is Lynn. So quite appropriate.

People have said that a cat chooses you and that they are your angel. So....for now....We have a cat. 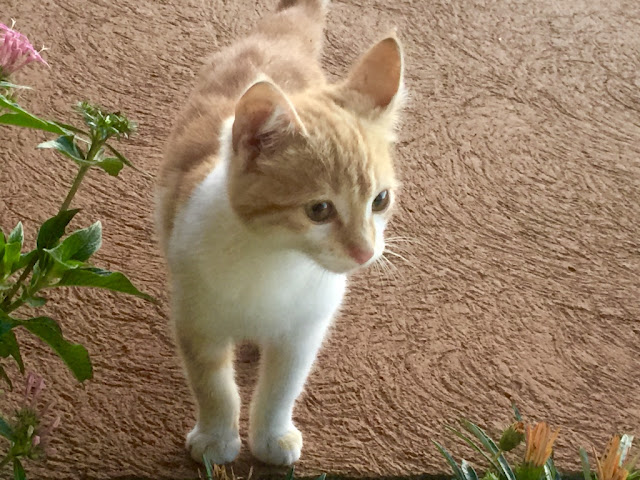 Second - Some of you may remember me buying lots of stuff (makeup etc) to bring to Costa Rica before I left SF. Many of you were perplexed and thought it was sort of odd because I should just buy things here. Well, I am so happy that I did -- because prices are crazy here for luxury items. I looked at a pair of Tom's (just a plain black pair) and they were $65 and up. I think @ Whole Foods the cost was about $58.

If you want to really save money here you have to adjust how you live. You cannot live the same way you did in the states. However, rent is so cheap that it is still worth while living here. My rent is $266/month (my 1/3) Rent in the U.S was $2,400 - you do the math!

Before I came, I bought lots of makeup - lipstick, etc but the one thing I did not bring was nail polish. Mostly because I heard that it would dry out and I figured "how much could it cost?" Really?

When I decided I wanted to paint my nails I went out and bought some polish at the Central Market. It wasn't too much. I bought a small polish remover and polish for about $4. 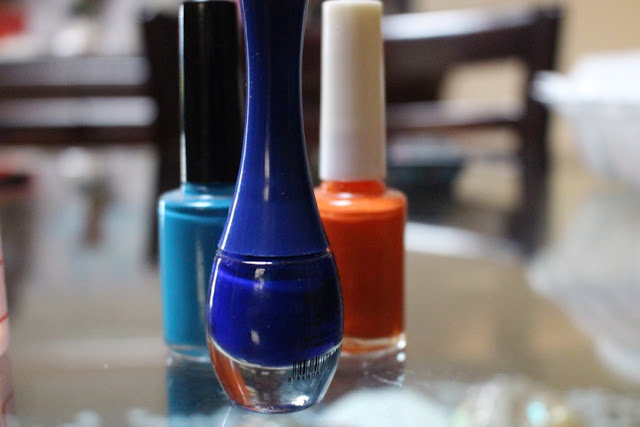 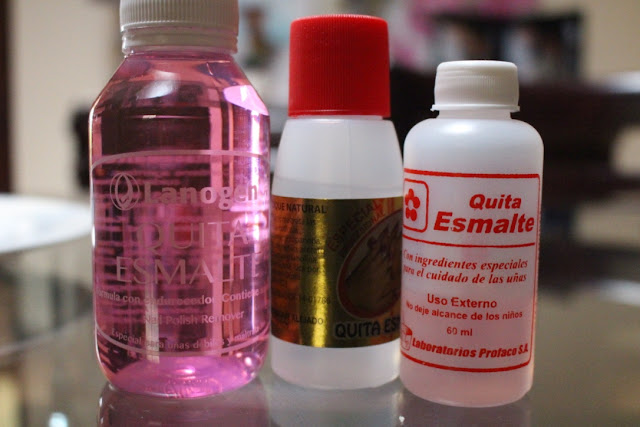 the remover is in small bottles (the images are much smaller than they appear!) The remover is not strong so you use up most of the bottle trying to remove your polish.

The polish was dreadful It chipped and peeled and just looked awful. It never went on smoothly from the start. Yesterday we were at the Auto Mercado (a grocery store which caters to expats) and I decided I was going to get myself a bottle of REAL polish with a brand name that I recognized. 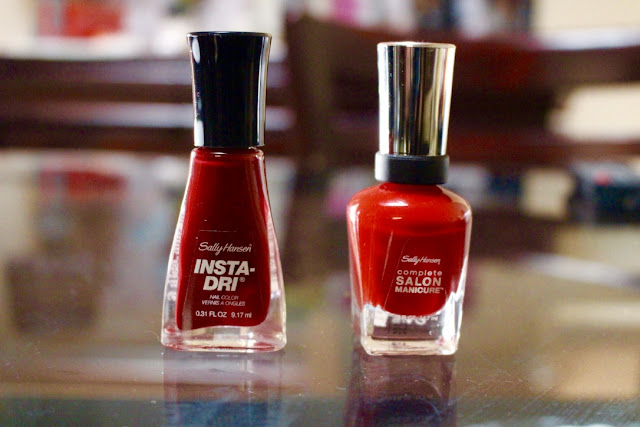 The smaller bottle was $7 and the regular size bottle was $12.50.  That is about twice the price that it costs in the states. The Revlon polish was $14

also pure maple syrup is $30. My Genoa salami is $6 a pack (about 8 slices) REAL cheese is crazy expensive like $15 or something. Yesterday I bought 3 packs and got charged for 4 - with the nail polish and other items my bill was $105
fruits & veggies are SUPER cheap but you gotta eat like a local or you will go broke!

Of course there are many, many pluses - Our view is to die for and the weather is perfect among other things so we still love it here!

Third - We finally bought a gas grill. Price was $275 assembled. (I think that was a pretty good price) We brought it home in the back seat of a taxi.  The gas can with gas was $75! (ouch)  - but you have to buy the can then take it to your local pulperia (neighborhood store) for gas refills.

To break in the grill we decided to invite a few friends over. Especially since we NEVER had a gas grill and did not know exactly how to use it.

Our short party video is attached below

Our 1st Party feat the cat that acts like a dog from Devon on Vimeo.
Video link above

Oh and Lastly - We took the bus to Alajuela (22 miles away) yesterday so I could get my hair done by my new Sisterlocks Consultant. Her name is Dr Carmen Hutchinson-Miller and she was awesome!!! Did a great job and took about 2 1/2 hrs (normal) The price was $40. I pay $100 back in the states. Cost of the bus was $1.20 ea way and takes about 30 mins.  Some of you may remember I was searching for someone to do my hair before I left. 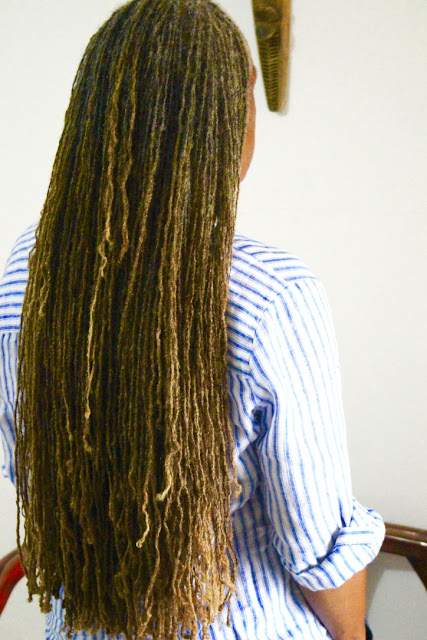 after my lock retightening 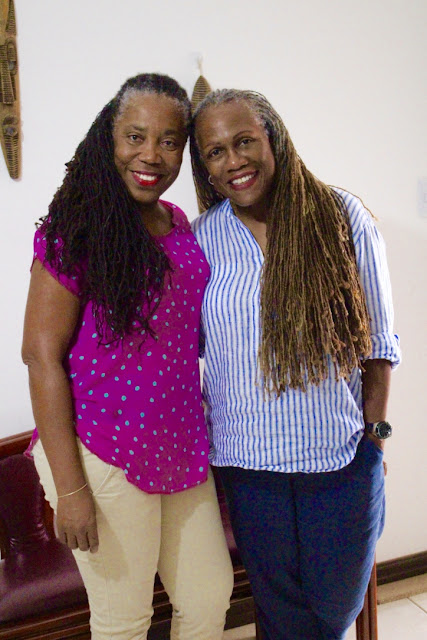 Dr Miller and me 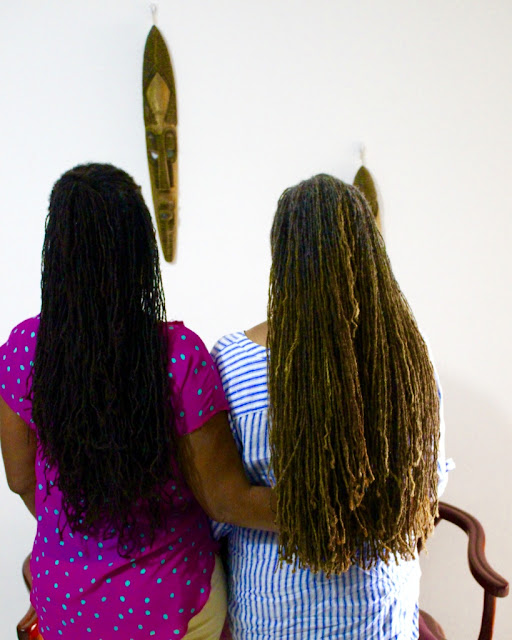 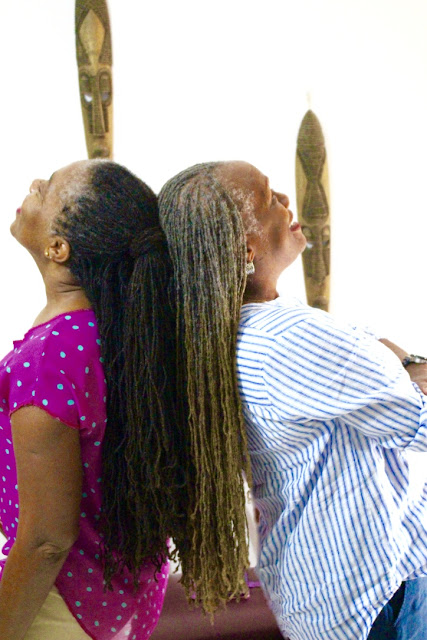 I won this one hahaha