Run for the border - Our life in Costa Rica


Since we arrived here on May 31st, our 90 days is almost over and the time has come for us to make our first "border run". Originally we had planned to make each border run an adventure and choose a destination that we were planning to visit anyway. Due to the death of my friend and our impending plans to return to the states and pick up the dogs, we decided to do a border run to wherever was nearest, quickest and easiest so that we could remain in the country legally (our 90 days is up on 8/29). That turned out to be Las Tablillas (which is about 3 hours away by car).  After obtaining recommendations from other expats we chose Jorge as our driver. He speaks English, (a big plus) and has taken other expats on many border runs. 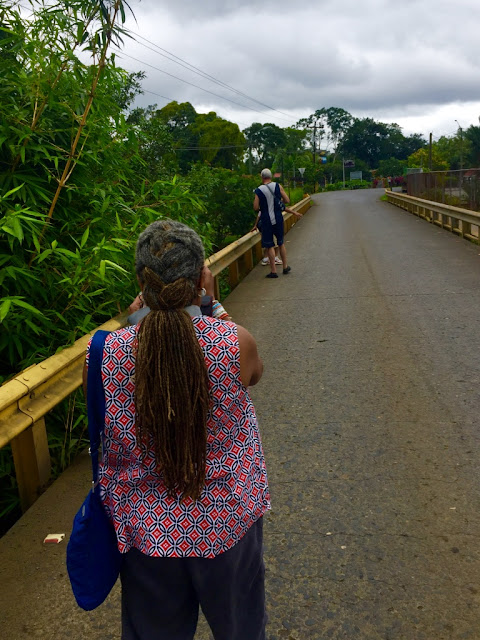 Jorge picked us up in his SUV at 7am and we began our trip to the border. Jorge uses a route which winds up and around the mountains surrounding the Poas Volcano (getting up to over 7,000 ft). The route is beautiful! Eventually we joined the main highway and made our way towards Los Chiles Costa Rica (the city nearest the border crossing). We stopped and had breakfast, checked out the iguanas and continued on to the crossing. 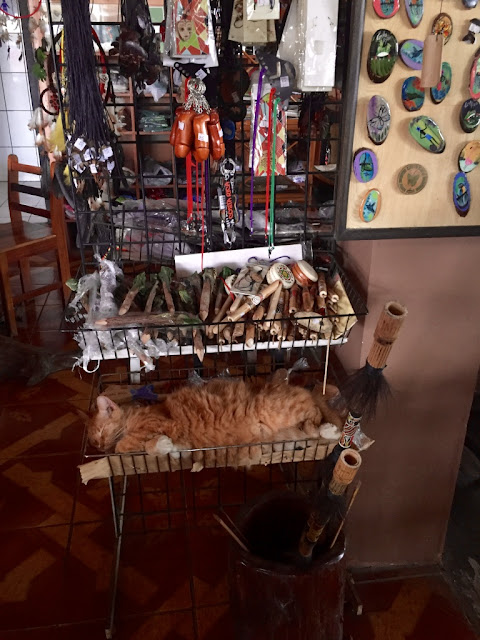 this is a real live breathing cat!! 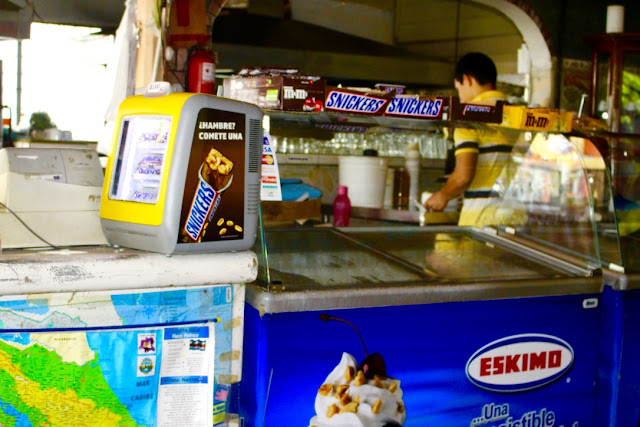 By midday we had reached the Costa Rica immigration point, and it had started to rain. Jorge accompanied us inside and helped us pay our Costa Rica taxes and complete the immigration forms.

The Costa Rica exit went fine. We got our stamps. The rule is that you must be out of the country 3 hours before re entering.

Jorge left us at the border crossing buffer zone. He would wait for us in the car until our return. He had directed us to stay in town for no more than ONE hour and then head back to the shuttle.

We entered the Nicaraguan immigration checkpoint where we presented our passports and were then directed to the next building where we again presented our passports and where we became a bit confused about what they were instructing us to do (in Spanish) so we were sent to another agent who spoke English. He took our passports and asked us if this was our first time in Nicaragua, where were we going and why, and how long we planned to stay. He also took our photos. The fees were paid ($15/ea) and we were given a stamped paper and told to return before 4pm as that was closing time. I then went to another location to have my bag inspected and was given another paper indicating the check had been done.

We then proceeded out to the buffer zone/neutral area to the stop for the shuttle where we again presented our passports and after approval moved on to another location where we showed them again. Unlike the Costa Rica side, the Nicaraguan side had a heavy military presence.

The shuttle was an old beat up mini van loaded to the gills with people and lots luggage on top. Once we were all onboard, several armed young soldiers came up to the vehicle looked around at us and asked for our "documents".  A few minutes later another group of gun carrying soldiers came up to the shuttle and selected a few more people and asked for their documents. (I was included in this group) Very serious looking -- No smiling faces on any of these soldiers. Once that was over we began our 45 minute trip into town (San Carlos). It was really pouring down rain by now. About 1/4 of the way into town we were pulled over at another check point and guess what??? Yep, they peered into the bus and asked yet again for our "documents".

By the time we reached town it was about 1:30. The rain was coming down and the streets were flooded. You could tell that the area was very poor and bus station was very old. When we inquired about returning to the border we were told there was a 2:00 bus and a 3:00 bus. Not wanting to risk returning after the border closed (can you imagine?) we decided to take the 2:00 bus (which would board at 1:45). Lavanson gulped down 1/2 cup of coffee and we headed back to the stop, found our shuttle and got on. Although we were the 1st passengers to board, the shuttle waited for a while until it was full and we left at 2:20. We arrived back at the checkpoint at about 3:05. Made our way back through the passport checks and into the building. We went to the window showed our passports and paid our exit fee then headed out to the Costa Rica side (BTW - the Costa Rica border police do not carry guns - at least not where you can see them) They were much more pleasant and we quickly moved through the return process. We also carried return bus tickets for 90 days out but were not asked to show them. We got our new 90 day stamps and found Jorge waiting for us by the side of the road.

I was over the moon to be back in Costa Rica!!  Not that this border run was the worst thing ever but I am just not a big fan of soldiers with loaded guns. I love that there is no military here in Costa Rica - which is a BIG reason I wanted to live here. I enjoy the unrestricted freedom to move about.

The ride home would have been pretty relaxing had it not been for the fog which engulfed the road and made it almost impossible to see for about 2/3 of our drive back. Jorge is pretty used to driving the route and he maneuvered the car up those narrow winding roads and through the mountains in the dark (there were very few street lights and a portion of the road was gravel).  We arrived back at our door safely about 12 hours after we left.

A big shout out to Jorge for a job well done! Cost for the trip was $200 (flat fee door to door). That total was split 3 ways!

Jorge also does other excursions so if you are coming to visit us you just might meet him on one of our sight seeing tours!


please check out the short video of our trip below

Run for the Border - Our Life in Costa Rica from Devon on Vimeo.