Attack of the Cleaner Ants! - Our Life in Costa Rica Yr #2

There are days when living in harmony with the environment can be difficult.

Yesterday started out pretty much like any other day. A beautiful morning. We took the dogs out for a quick walk to do their "bid-ness" and we went back inside.  I was working on getting more pictures up from the wedding (in case you are interested, everything is posted on our video channel) anyway around 11:00 I just happened to notice a couple of ants in the master bedroom and one on Lily. As I got it off, and then tried to kill the other 2 ants, I noticed that they were extremely hard to kill. I mean I have become a pro at ant killing and these 2 little suckers refused to die. So, I looked out the window to see where they came from and lo and behold I saw a gazillion ants streaming past the window. I grabbed my diatomaceous earth and headed out the door to discover their trail and put a halt to them. That is when I found  a battalion of them streaming all over our patio and up the wall heading for the attic. "OMG WTF" is all I could think. I called Lavanson outside and we tried to figure out whether they were the infamous "cleaner ants".

These ants are legendary and I had read stories about them before moving to Costa Rica, but NEVER thought I would actually have to confront them.

They are the Costa Rica army ants, also known as "cleaner ants" because the ants come to clean out the cockroaches, spiders and any and all other vermin in every nook and cranny as thoroughly as any exterminator -- and then they leave! This can take anywhere from half an hour to several hours, but I am told they always leave before nightfall. 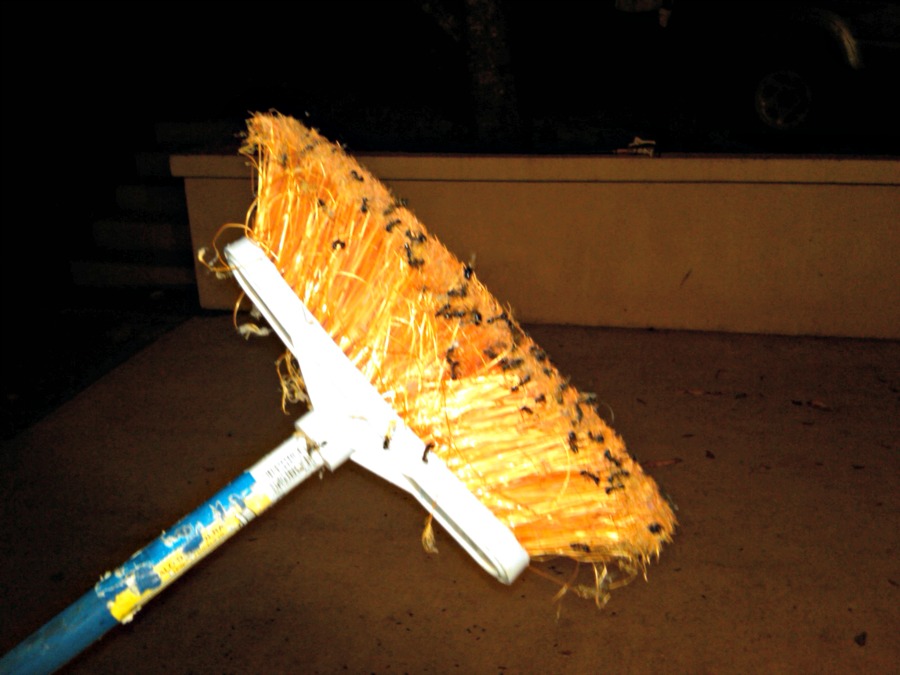 Freaking out, I called our friend Shirley and our landlord Marcelo. Marcelo confirmed our suspicions and verified that they were indeed cleaner ants. He told us to keep our distance because their bite is not very pleasant and assured us that they would not be at our home for long. "they come and they go as a group" he said. He also told us he had phoned his sister (who lives next door) and she would be coming over to help. In a few minutes she appeared at our gate with a can of insect spray and began spraying. She told us that they had visited her home as well. She said she was also spraying each doorway of our house to help deter them from coming inside. If several of them got inside they would all follow. Truly, just like a marching army troop!

(A couple of things that probably contributed to the invasion are; the season is changing from wet to dry and the coffee beans are ripening and there are workers in the fields next to our house picking the coffee beans)

We watched as the ants began dropping from the walls, and as she left us, she told us to continue to monitor them. Shortly thereafter, Shirley sent her brother over to take a look as well. He is a gardener and landscape architect. He arrived equipped with a sprayer (it contained a powder that he put in several open holes). He said they would take it back to the nest and it would suffocate them. He said that the product would not hurt our pets. His description fits that of Diatomaceous Earth which I also have on hand and have used against the leaf cutter ants in the past, along with essential oils. Trust me, with all the different species of insects in Costa Rica, I have tried every trick in the book!

We were assured by everyone that the ants would be movin along shortly - usually gone by sundown. Later we went outside for the clean up. Lots and lots, and LOTS of sweeping up of dead ants -- and surprisingly many that had miraculously survived the spraying. We swept several heaping amounts of them into the dustpan and threw them into the coffee fields.

We have heard and read many stories -

Here is an excerpt from one story:


In the tropics, bugs are a fact of life.  From the teeny-tiny ants that get attracted to a drop of water, to big fat rhinoceros beetles, bugs are all around us.  Bugs that bite and make us itchy, bugs that strip a plant of its leaves, bugs that infiltrate any food source not sealed up, bugs, bugs and more bugs.

Of all the bugs, probably the largest group are the ants.  And there are many different types of ants, none of which are my friends.  This week, we had a run-in with the house-cleaning ants.

The house cleaning ants have colonies in the thousands.  They normally come just before a rainfall, and if you're unlucky, they might target your house, or in our case, our hostel.  They invade for a couple hours, clean up all the mess (take away bug corpses etc), and then pack it up and leave a few hours later.

Read the the rest of the story is here

So far there is not much you can do about these ants.  I read that if they do not get inside the house they may return (so it's better to let them in). Hope not! In an effort to continue using non toxic products (always my preference), we will try cinnamon around the doorways if we see them again! (if that doesn't work I will spray! LOL)

Oh and y'all, please feel free to say a prayer for us!!

Check out our (updated) video below


The Attack of the Cleaner Ants! from Devon on Vimeo.