Posting a short video of the new gates we had made to enclose the side of our house and make it into a dog run for Lily & Lola. If you have ever looked at photos of our house you will notice that we have a pretty big yard. 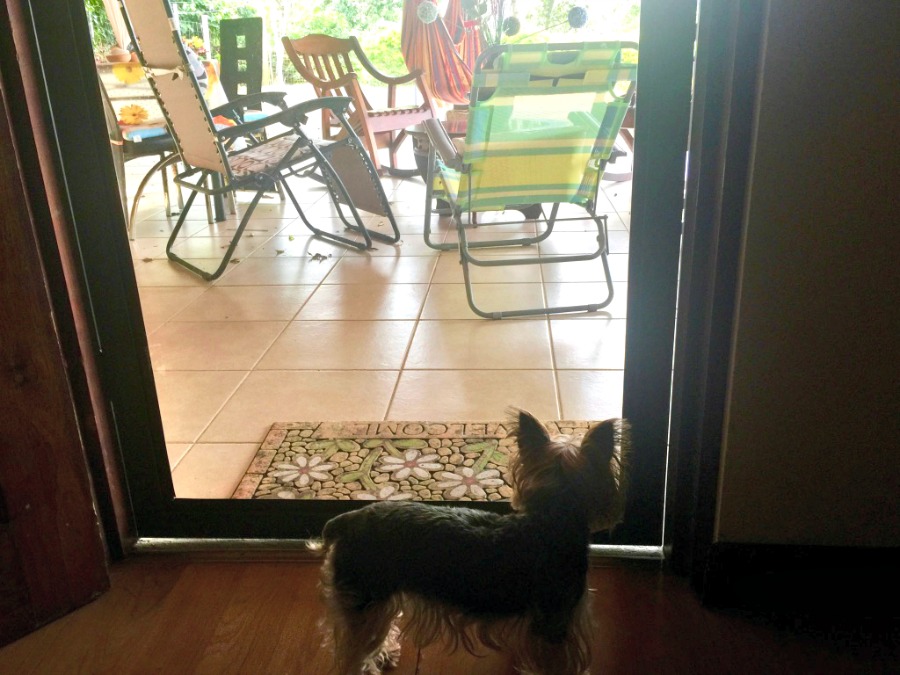 Lola looks out at the patio (where she can clearly see the cats, now that we put in the new door)

When we first moved here, we thought just fencing the area would be enough to hold them, but even though it is fenced now, there are way too many small openings here and there that are just big enough for the girls (dogs) and the boys (cats) to get through. We feel it is not safe for the dogs once they are outside of the yard. 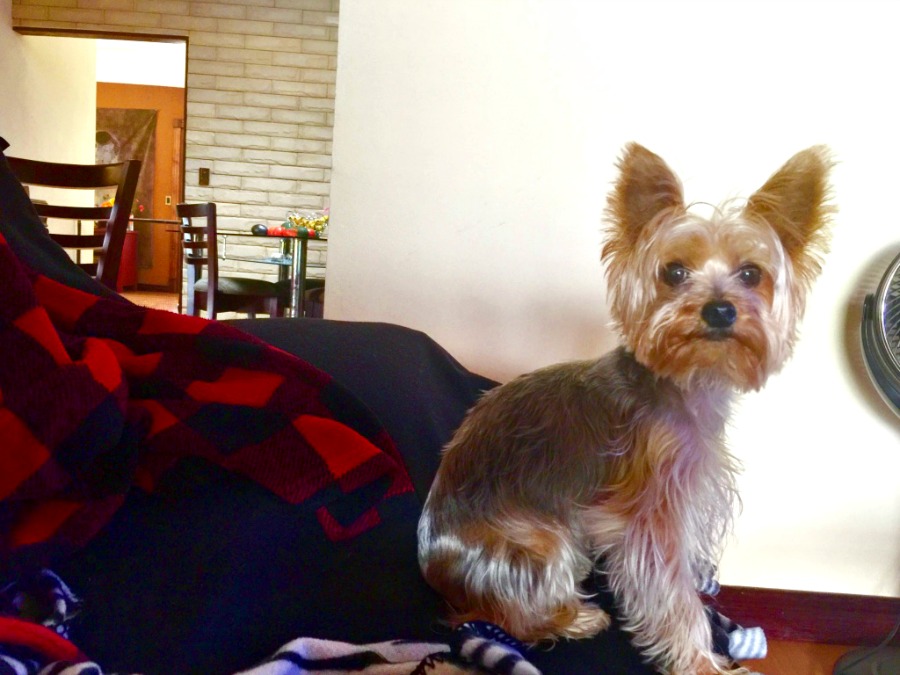 In Costa Rica dogs are free to run the streets. Many of the dogs are strays and lots of them are bigger than ours (but I might add, many of them are very little and they make it just fine out there). If you are a Costa Rica dog, you know how to take care of yourself, since this has been your entire existence. However, the urbandoggs don't know nothin bout taking care of themselves out there on those mean streets! They are used to being walked on a leash in the neighborhood or in a supervised play area at the dog park! So, they we have pretty much been pinned up inside the house since they arrived a year ago. 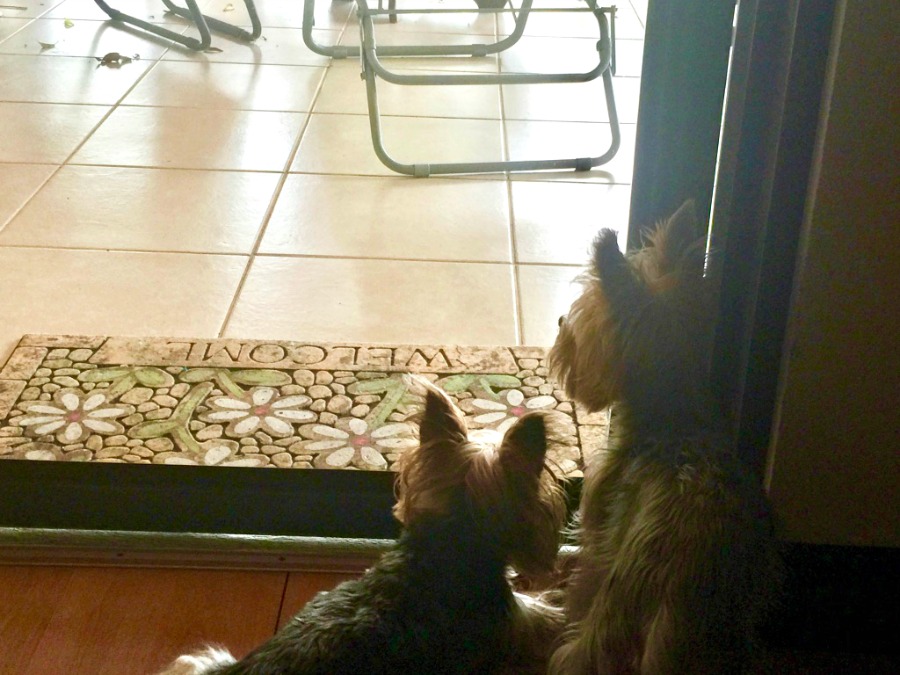 The other problem, as I have mentioned before, is that we had no idea when we moved here that we would end up with 2 cats adopting us -- and that the dogs would absolutely HATE them (even after a year) The barking that goes on when the cats come to sun themselves right in front of the window(s) where the dogs are, is well...crazy making!!! Then the screaming begins as we try to settle the dogs down and...it's a real shit show!

So...both the dogs and us, needed a change.

Finally we figured out a solution! We would gate the area along the side of the house and turn it into a dog run. On one side of the house is a high retaining wall and the other side is the house. No holes for them to escape through. Next problem...how do we find a gate? BTW - we found NO doggie gates at any of the pet stores (most pet supplies are found at a vet clinic) We did find one sort of baby gate which we use inside the house, holding it in place with filled up water bottles because the walls are cement and so nails are pretty much a no go. All part of living in paradise y'all. 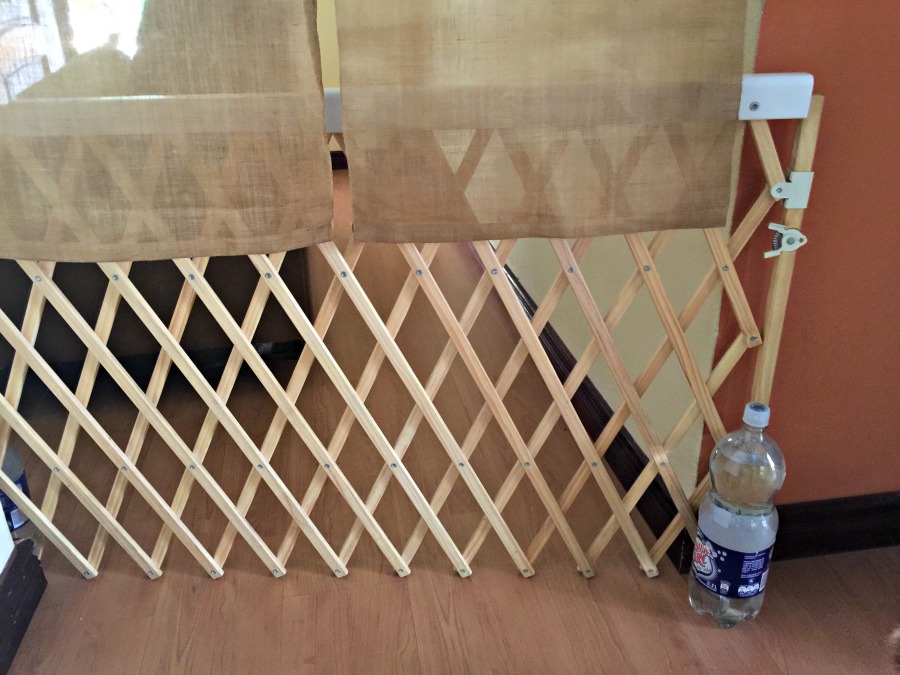 In Costa Rica you don't just go to the local hardware store to buy a gate (BTW there is NO Home Depot in Costa Rica). You have to make it yourself or find someone to do it for you. Just so happens that the same gentleman who made the back door for us could also make the gates. (Tip for today - if you move to Costa Rica find yourself a GOOD handyman)We went into town and bought the supplies (less than $20). He came over to measure on Tues, sent us a design on Wed and on Friday he was back to install it! YES!!

Thank you Jesus, we are so happy!!!!And the gates are beautiful.

A Gate for Lily & Lola from Devon on Vimeo.

Screens on 9 windows, new screened back door and 2 side gates ✅
Pura Vida - Life is Good!