As some of you may know, Dr Angela Davis was in Costa Rica on Tuesday. She was here to deliver the inaugural lecture for the 2018 school year for the University of Costa Rica.

And the memories came flooding back!

Founded in October of 1966 in Oakland, California at Merritt College, by Huey Newton and Bobby Seale, the Black Panther Party for Self Defense (BPP) became the most famous black power organization of the late 1960s. It has become a model for other exploited and oppressed people within a government.

"Free Huey" was our battle cry!

I began college in the the fall of 1968 and I was deeply affected by the Black Panther Party. Like many other young black people, I wanted very much to join.  I saw the civil rights demonstrators, the freedom fighters, and I was very impressed. I wanted to spread consciousness about black oppression and exploitation. This was the start of my social activism. Not an easy thing to do on a college campus in Colorado (located in the middle of cattle country) where there were barely 100 black students.  But, we tried. We started the Black Student Union and staged sit ins at our administration office to obtain classes which were relevant to black people.  I still remember how terrified I was that that we were going to be arrested and of course my parents knew nothing about what I was doing. I ended up with a minor in Black Studies.

Eventually, in 1974, I left Colorado and moved to Oakland California. I lived in California until our move to Costa Rica in 2016.

Anyway, all of this came back to me as I sat among today's young college students and listened to Angela Davis deliver her powerful speech on Tuesday. With 1,000 in attendance, Dr Davis received a much deserved standing ovation at the end of her lecture. 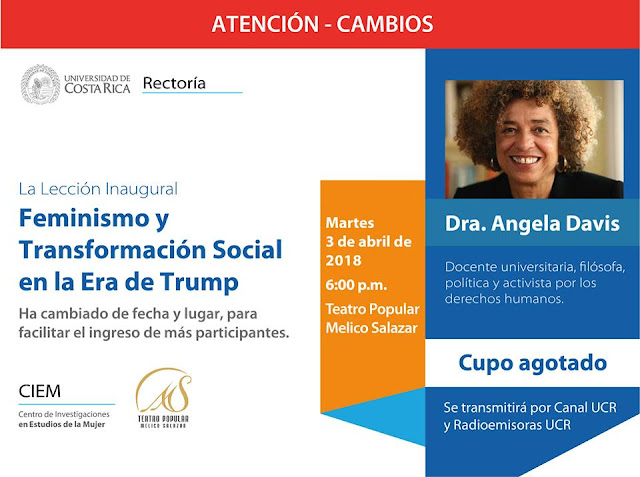 BTW- Getting to an event or just about anywhere, for us, is part of the adventure. We left our home on the ridges of San Luis at approx 2:00pm for a 6:00pm event, held in San Jose, a mere 27 miles away. We arrived home around 10pm.


Angela Davis in Costa Rica from Devon on Vimeo.

We were seated in "piso tres" ( 3rd floor)  I did not take my "real" camera with the perfect zoom.
This video was shot with my iPhone.

Music Credit
(For God's Sake) Give More Power to the People is the third studio album by American soul group The Chi-Lites, produced and largely written by lead singer Eugene Record. The album was released in 1971 on the Brunswick label